Chauntiel Lewis of Fort Worth Texas contacted an EXOTIC STRIPPER company for a male stripper to dance for her. The exotic dancer company stated in their experience she ordered a black male dancer but the company stated the male dancer canceled the event last minute due to a injury he suffered a few hours prior to event. The stripper company tried to contact Chauntiel Lewis 3 times regarding the issue but there was no answer. Company asked Joey to try to call the client and see if they approve of you before driving out there to Fort Worth from Garland Tx. reason, because company tried to call 3 times and needed to move on and handle the business with others.

Long story short, Joey blindly drove out there, the client approved of him and payed him to dance, party went well other than the story the male dancer provided us in that Chauntiel Lewis of Fort Worth was very hands on with him and very demanding for such little money spent.

Chauntiel Lewis needed to be blocked from calling the company because over 30 phone calls were placed by this angry woman. The emails from her about sending a white guy were very offensive to the stripper company. The company used their judgement by sending a tall experienced latino male dancer due to this bad customer not answering her phone. The company stated they could have just not sent anyone at all and went about managing the business the entire evening. This woman threatened to harm the company from the first email with the bbb and whoever else. 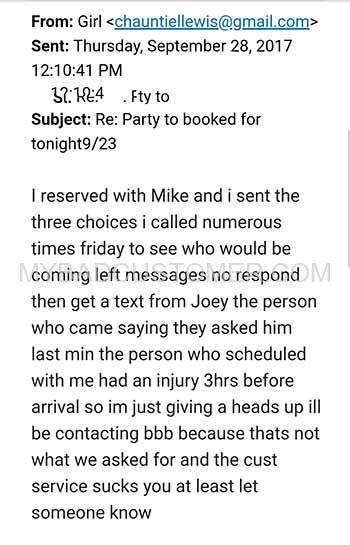 BLACKLIST Chauntiel Lewis Firth Worth Texas from any services